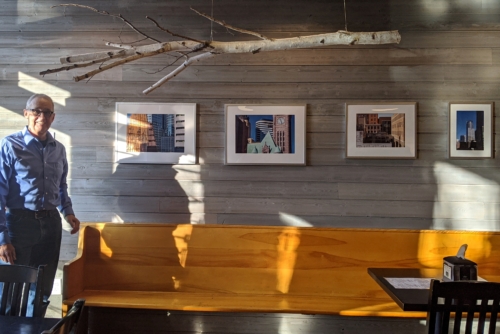 The contrasts of different geometric shapes, colors, and textures in Minneapolis’s downtown buildings lend the city great beauty. The circles, cylinders, triangles, and square and rectangular blocks, combined with the prominence of white, blue, and gold colors, offer the photographer numerous interesting compositional possibilities. Some buildings, such as the Oracle headquarters with its many angles, the Cappella Tower with its half cylinder and tall capped cylinder set in flat walls, or the Thrivent Financial building with its angles and polygons, are interesting in their own rite, but in most cases it is the juxtaposition with other buildings that makes the city so fascinating architecturally. The colors on some buildings, set against the predominantly blue and white background of the other buildings, bring out the contrasts of shapes. That is the case with the green copper pyramids of the city hall roof, the silver and gold vertical lines of the Wells Fargo Center, and the maroon mirrored glass of the Thrivent Financial exterior. I hope these photographs convey the great beauty and geometric interest of Minneapolis’s downtown architecture.

Gerald Hoekstra lives in Northfield. Before retiring, he was Professor of Music at St. Olaf College, where he taught music history and directed the early historical music ensembles. As a photographer, his primary interests are landscapes, architecture, and wildlife—particularly birds. His photographs appear in Bob Janssen’s Birds in Minnesota and several other publications; in the Daily Bird and BirdsEye birding apps; and are often featured on the Minnesota Ornithologists’ Union homepage.

To see more of Gerald’s work please visit his web site on Flickr.