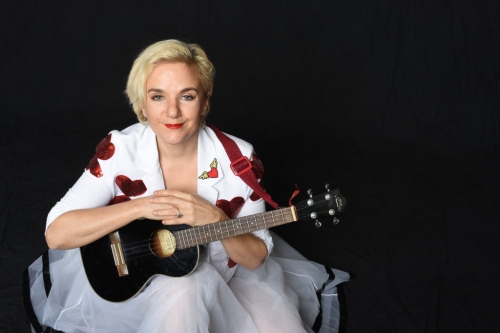 Originally scheduled to play at the Guild Theater, this concert has been re-imagined as Katy Vernon #LiveFromHome. Follow along on Facebook as Katy Vernon shares an intimate evening of songs and stories with audiences near and far. Vernon has opened for the 411 Concert Series in the past and now takes the virtual stage headlining a solo evening of music special for Northfield audiences.

Viewers can access Katy Vernon #LiveFromHome free of charge, but are encouraged to make a donation of any amount via a donation link on the Guild’s website. All donations are 100% tax deductible and will help sustain the Guild during these challenging times, while also supporting our continuing online arts engagement.

Katy was born and raised in London, UK but in the past dozen or so years has established herself as one of the busiest musicians in Minnesota, combining melodic pop/folk songwriting with her twangy Americana band. She has appeared at festivals in the Midwest and UK such as the Ukulele Festival of Great Britain, The Grand Northern Ukulele Festival, Taste of Minnesota, Stars of the North, Big Turn Fest, and Hazelfest. Her newest record Suit of Hearts was just named as a top ten record of the year by the Star Tribune. She has just returned from her third UK tour.

Suit of Hearts is the sound of an artist simultaneously growing and in full bloom, and it’s exciting to hear.” Jim Walsh – MinnPost

“The songs on the album deal with sadness and regret, but when you listen, you hear a woman also finding strength and opening doors to a brighter future.” Colleen Cowie – Minnesota Public Radio

Many thanks to our 411 Concert Series Sponsors

Additional support by our Media Sponsor, our Lodging Sponsor, and our Beverage Sponsors