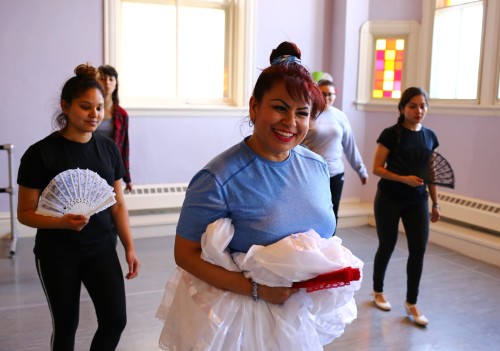 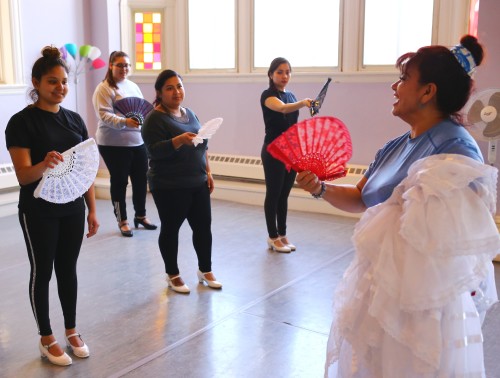 The Baile Folklorico is preparing its unique style of dancing for the Northfield Arts Guild dance concert in May. The group represents a special kind of folk dancing with roots in the many states of Mexico–31 in all. This year, music and costumes will reflect the cultures of Jalisco, Veracruz, Sinaloa, and Chiapas. And amid the whirling skirts and high-stepping is Kate Stuart, head costumer who also is a longtime dancer, teacher, and choreographer.

“Our lead teacher, Ana Baez, moved to Northfield about 12 years ago,” Kate Stuart says. “We are so lucky to have her!” Baez now handles Folklorico teaching duties. Both of Stuart’s daughters are in Baez’s dance classes, she adds. She says that the classes are about one-half Latina and one-half other ethnicities. (Her own daughters are of Chinese origin.) But donning the dresses, rich in ribbons, laces, and embroidery of each area, inspires all of the dancers, age 4 through adult, to emulate and convey the excitement of this rich tradition.

Kate Stuart says that Mexico is far from a homologous culture. “In researching the costumes of Durango and Chihuahua, for instance, I learned that German and Czech clothing influenced styles, because people emigrated to Mexico. Many nationalities have gone into what makes up Folklorico today.”
To teach young dancers the background behind the dances, she has prepared coloring sheets with pictures of costumes, maps, and flags of each state. She says that, since the flags often contain that state’s seal, it’s easy to learn about the industries and ethos of each area. While students work on dances, they learn that the movements such as swaying to the music of Jalisco, represent the ocean’s waves, as it is on the Pacific Ocean.

For the past month, the Folklorico dancers have been working with Carleton College dancers, and will be performing at the college’s International Festival on April 30. Their season will culminate when they take part in the Northfield Arts Guild’s Spring Dance Concert at 3 p.m. on May 14 at Northfield High School. Olé!